We are fully committed to being a church community for today and the future.

Equally important is the care that we take of this elegant building that has been a witness to the glory of God and served the people of Camberley since 1851. We can with your help.

The church was built in Victorian times when one third of the population went to church. Hawley Church had proposed building a church on land granted by the Royal Military College, Sandhurst as it was found that ‘three hundred persons were living more than two miles from the parish to which they belonged’.

Originally known as Newtown, Yorktown was the first part of what is now Camberley to be built. Cambridge Town came later, but as this caused postal confusion, the name of Camberley was adopted for both areas.

The building was designed by Henry Woodyer, and built of local Frimley stone in Victorian Gothic style. It originally consisted of a nave and chancel only, with a small bell tower, later removed.

It was consecrated on 6 May 1851 by Dr Sumner, Bishop of Winchester, in whose diocese the parish remained until the formation of Guildford diocese in 1927.

The church was added to by Mr C Buckridge, and in 1891 the tower and spire were built in memory of Freda Middleton, daughter of the Revd and Mrs Middleton.

The carvings above the aisle are circular in design and depict biblical scenes. The artist was Henry Gomme who also carved the roses around the chancel arch.

Most of the important features of the building were gifts to St Michael's in the latter half of the 19th century, including the pulpit, reredos (screen behind the holy table), the stained glass in the east and west windows. The original lectern was stolen in 1996: the replacement was crafted by the late Dennis Wagner.

The west window was probably in the main wall of the original nave, and was moved to its present position when the tower and spire were built.

The font was given in memory of Frederick Middleton, who was vicar of the parish for 27 years. The Middleton graves can be seen in the churchyard near to the gate to the vicarage. Three other vicars of St Michael's are buried in the churchyard. A list of vicars may be seen on the south wall of the church and their photographs are in the clergy vestry. Near the font is a wooden cross made by prisoners of war held in Camberley during the 1939-45 war.

Another interesting grave, Grave 1, near the gate to the vicarage, holds the remains of John Stallwood, Cordwainer. Near to the south (main) door of the church you will find the grave of Sergeant Fineghan who fought in the Crimea and was an orderly to Florence Nightingale. There are also two holders of the Victoria Cross buried in the churchyard.

Parish records date back to 1851, the first entry being the baptisms of Stephen and Maria Ellis. The first wedding was in June 1852. The early entries show many infant deaths and few deaths of anyone over 70 years old.

What St Michael’s has been up too…..

A meeting of men at St. Michaels Church on the London Road (see picture, left) during the summer of 1895 led to the formation of a football club. With the permission of the vicar at the time, Reverend C.J. Berryman, the club was named St Michaels, Camberley. The first recorded friendly took place on 13th October 1895 against D Company of the Royal Medical Corps. The Camberley side registered a 4-2 win with A. Adkins, the centre forward, scoring the first goal for the club. St Michael’s put in for affiliation to the Surrey Football Association. According to the minutes of the Surrey F.A., the then Surrey F.A. Chairman, Mr. Percy Brandon announced that their membership had been granted at a meeting at the York Hotel, Waterloo Road, London SE on October 21st 1896. For the first couple of seasons, St Michaels only played friendlies. Their first foray into competitive football came when they entered the Surrey Junior Cup in 1897, and it proved very successful. After cruising through the early rounds St Michaels Camberley came up against tougher competition in Guildford in the 4th round, who they beat 3-1 in a replay after drawing 1-1. The semi-final saw two titanic battles against Kingston on Thames, both matches being played at Guildford. The first semi-final played on 5th February ended 1-1 but St Michaels won through at the second attempt a week later 2-0, W. Morrison scoring all the goals. In the final on 12th March, St Michaels lifted their first trophy, beating Norwood & Selhurst 2-1. F. Dobson opened the scoring only for Norwood & Selhurst to level things soon after. W. Morrison fittingly scored the winner to clinch the trophy, and with it came the offer of senior status. The Club joined the East & West Surrey League. The team for the Cup Final was W. Collins, C. Smith, S. James, J. Perkes, F. Kinsman, J. Pyniger, F. Dobson, G. Andrews, W. Morrison, A. Godwin and G Scott jnr.

With elevated status, St Michaels, Camberley were able to attract some better players. One of whom was ‘Archie’ Turner. He made his debut in St Michael’s first senior match against Guildford which was lost 4-1, on 1st October 1898 and remained for just the one season before being snapped up by Southampton. On 17th March 1901 ‘Archie’ Turner went on to make his first of just two appearances for England, both as it happens were against Ireland.

After just two seasons the Club found it too expensive to maintain and gave notice that they would not continue after the end of the season 1900/1901. This gave plenty of time for those interested in the game to consider the position and as a result a public meeting was called at the Yorktown schools on ??th January 1901 to consider the desirability of running a ‘town’ football club for Yorktown and Camberley. Dr. A.T. Wooldridge, who had been a Vice-President and a keen supporter of the old St Michaels team, presided. It took only a few minutes to decide to form a new Club and the rest of the meeting was taken up with a discussion regarding the name of the new club. Eventually after much discussion, the name “Camberley & Yortktown” was decided upon. It was also decided and agreed to by the Surrey F.A. that Camberley & Yorktown take St Michael’s affiliation and this enabled the new club to take over from St Michaels in the East & West Surrey League, but senior status was not granted to the new club.

In the early days, the biggest difficulty that confronted the club was that of finding a suitable and permanent ground. Camberley St Michael’s played their matches at any ground they could find until, in 1898, they applied to the local council for the use of the London Road Recreation Ground and they were given permission to collect donations to help fund the Club.

St. Michael’s Parish is a very diverse parish and is part of the St. Michael’s Ward.  The area it service is made up of Residential homes, Army Quarters, Social Housing, and Owner Occupier, as well as shops, Pubs and Clubs, Solicitors, Estate Agents, Restaurants, A Dentist and offices, an Industrial Estate, Three Schools including a Special Needs School, Council Offices, Railway and Bus Station, Museum, Library, Mosque, Five Churches (Anglican, Catholic, Baptist, United Reformed/Methodist and a Free Church.

St. Michael’s Church has two regular Church Services on a Sunday. A 9am, and a 10.30am Service.  We also have special services at different times of the year: Good Friday and Easter Sunday, A Commemoration Service, Remembrance Sunday Service, Christingle Service, Carol Service, a Special Carol Service for the Bereaved, as well as services for Baptism, Weddings and Funerals.  We also have a churchyard for Burials and the interment of Ashes. We have a thriving Children’s’ and youth work and Mothers Union.

Our church and hall is used on a regular basis for both church and outside organisations, such as Stamp Club, Camberley U3A, Camberley Speakers, Church Meetings, Lunches, Mothers Union, Knit & Natter and Children's groups. 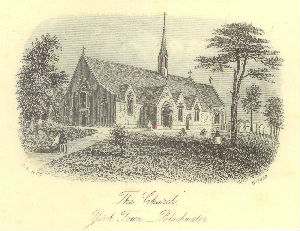 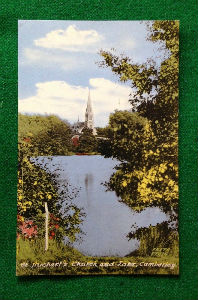 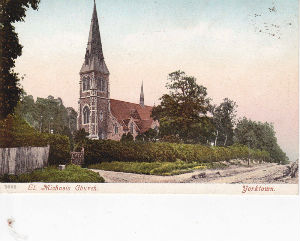